The 2019 season has finished and it’s been another profitable one overall for my bets, with the year closing in a profit of 23 points on all wagers, which isn’t bad considering how many losing outright semi finalists and finalists we had.

In ‘for the money’ matches, which were mainly semi finals (for each-way bets) and finals (for simply ‘to win’ bets) plus the odd quarter final (for ‘quarter winner’ bets) we won only four of 16, which is incredible.

Small moments define seasons (and profit and loss balances) and these were the moments that could (and in some cases definitely should) have made 2019 a great season:

33-1 qualifier Filip Krajinovic losing the Budapest final from a set up and 1.22 in play

There were several more where they came from, but as poor luck goes in key matches, that takes some beating.

Fortunately, we had a few of those players each-way and/or hedged out on a few, ensuring that we made a profit on the outrights for the year.

There were some great highlights, too, with Dominic Thiem winning Indian Wells for us at 80-1 and Adrian Mannarino taking his maiden title in Rosmalen at 25-1, and perhaps most pleasing of all was turning a profit on the daily bets.

The strategy of mainly having small stakes in plenty of tournaments at value prices and skipping a few weeks of the clay swing definitely helped in that regard, so there’ll be more of the same to come in 2020.

Following on from the launch last year of my statistical guide, I’ve made a few tweaks and additions to the data and all of 2019’s information is now in the guide, which is now available for purchase once more.

This year customers will get both a PDF and Excel version of the sheet included in the price and I’ve added information on service holds and altitude that each tournament is played at.

So, a typical tournament sheet will look like the one above/below, while there’s more statistical breakdown on the M1000s and Slams and lists in order of the most to least tie breaks, holds and underdog winners, plus a detailed breakdown of my own results by week/by year. 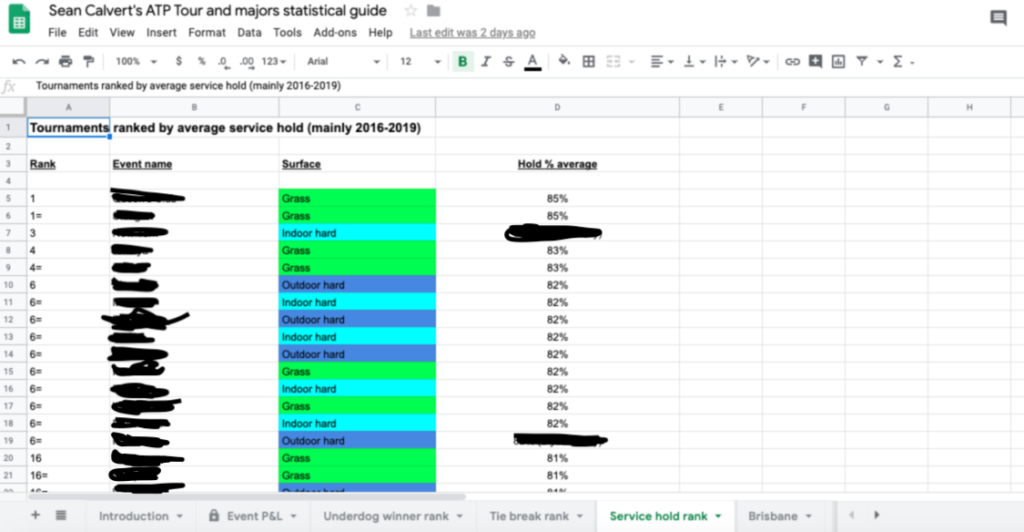 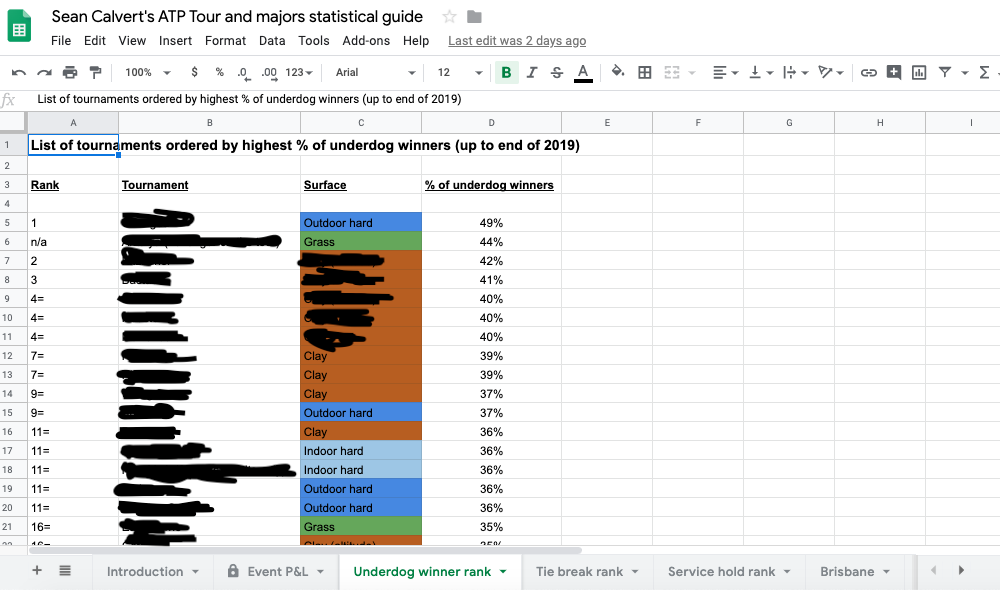 The cost of purchasing the guide is the same as last year (£25.00) and you can get it at the PayPal link below:

Orders are usually emailed to the registered PayPal address within minutes, but can take up to 24-hours to be sent, depending on the timezone.

As far as 2020 is concerned, I’ll be starting daily and outright bets after my holiday from week two (January 13th) following the latest ATP knockabout event (the ATP Cup).

Many thanks for following in what was yet another profitable year in 2019 and special thanks to those who purchased my tournament guide and good luck for 2020.

Merry Christmas and a Happy New Year to all!